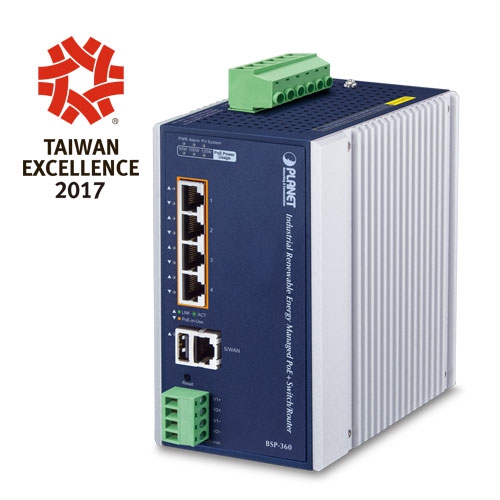 PLANET’s newly-launched Renewable Energy Industrial 802.3at PoE Managed Ethernet Switch, BSP-360, is designed for deploying a surveillance or wireless network and remotely monitoring and managing the IP-based devices. Based on its green technology, the BSP-360 can be charged by the inexhaustible and natural source of energy, such as solar, wind and hydroelectric power to conserve energy so as to economically power these remote IP cameras and wireless APs, especially used for such expansive applications as dams, forests, deserts, national parks, nature/animal protection areas and highways.

An MPPT (Maximum Power Point Tracker) is an electronic DC to DC converter that optimizes the match between the PV solar panels and the battery bank or utility grid. They convert a higher voltage DC output from solar panels (and a few wind generators) to the lower voltage needed to charge the battery effectively. It can support PV module input of up to 400W of power. 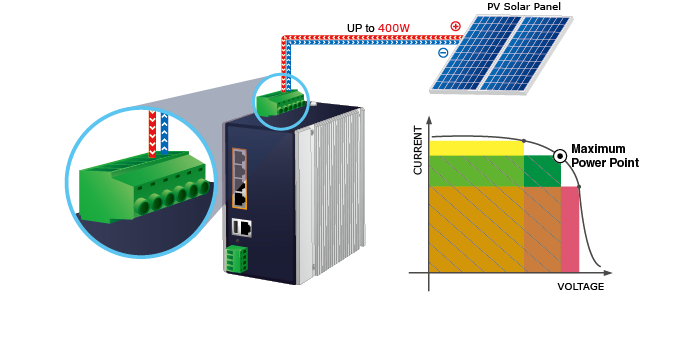 The 24V lithium or lead-acid battery gets recharged by way of the BSP-360 where solar power is sourced. Thus, the BSP-360 will keep powering PD devices without the need of any cabling. Its zero-carbon feature is made possible as the energy the unit gets is renewable. Most importantly, the operation of outdoor wireless IP-based surveillance can be continued into the night as the battery is charged during the day.

The administrator can remotely access the BSP-360 to know the power status of the battery and renewable energy, and the estimated time of power consumption.

If the remaining energy is too low to power the network, the system will automatically power off the device to make sure the system works normally, and an alert is then sent to the administrator at the same time. 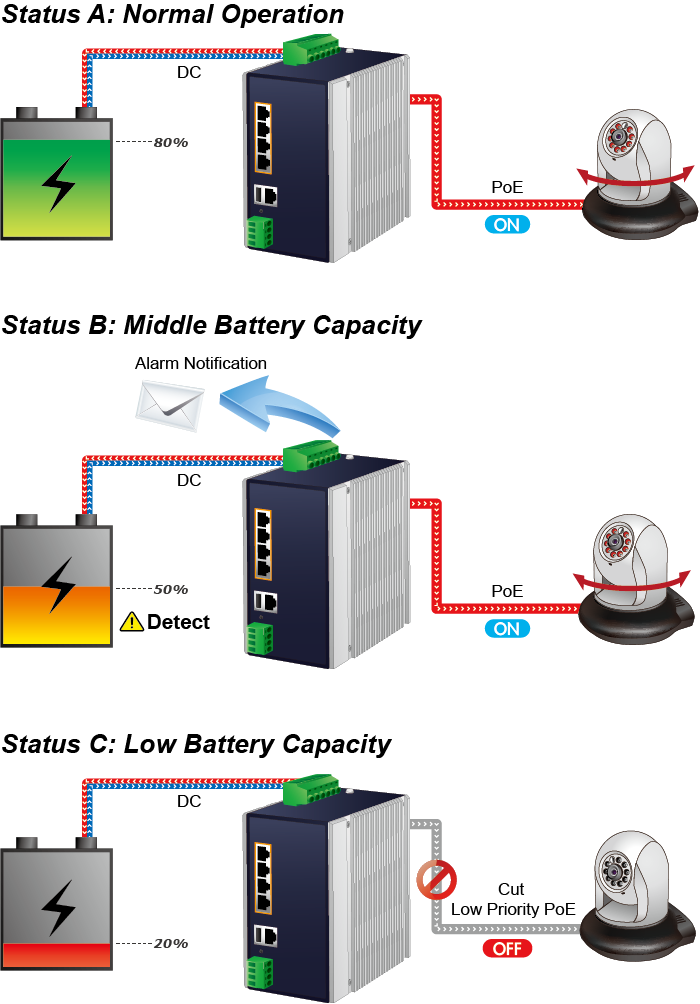 As it is the managed PoE switch for surveillance, wireless and VoIP networks, the BSP-360 features the following special PoE management functions:

The BSP-360 can be configured to monitor connected PD (powered device) status in real time via ping action. Once the PD stops working and responding, the BSP-360 will resume the PoE port power and bring the PD back to work. It will greatly enhance the network reliability through the PoE port resetting the PD’s power source and reducing administrator management burden.

The BSP-360 allows each of the connected PoE IP cameras or PoE wireless access points to reboot at a specified time each week. Therefore, it will reduce the chance of IP camera or AP crash resulting from buffer overflow.

Under the trend of energy savings worldwide and contributing to environmental protection, the BSP-360 can effectively control the power supply besides its capability of giving high watts power. The “PoE schedule” function helps you to enable or disable PoE power feeding for each PoE port during specified time intervals and it is a powerful function to help SMBs or enterprises save power and budget. It also increases security by powering off PDs that should not be in use during non-business hours. 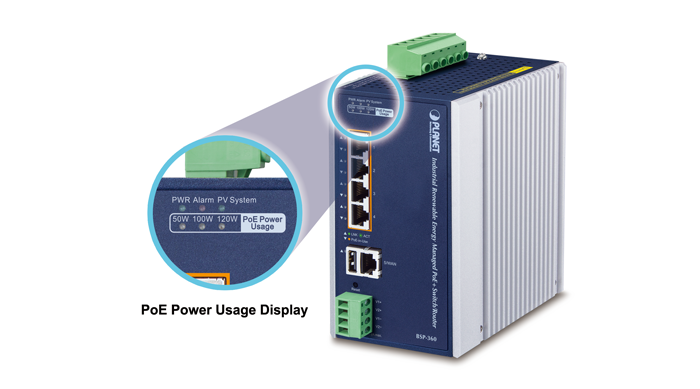 The BSP-360 PoE Managed Switch can be deployed anywhere in the city where there is no direct AC electricity. With PoE over the Cat5 cable, wireless AP and SFP media converter, you can check the current energy consumption and battery status in your office within the configuration interface of the BSP-360.

With its expanded home-use feature, the BSP-360 Renewable Energy PoE Switch helps SOHO/home users to create an integrated network where power is so easily utilized for transmission of data and video. It integrates IEEE 802.3at PoE technology and renewable power system. The wireless AP and PoE IP camera devices work perfectly with the BSP-360, which injects power through the Ethernet cables, thus helping SOHO/home users to build a cost-effective and reliable PoE network environment easily. 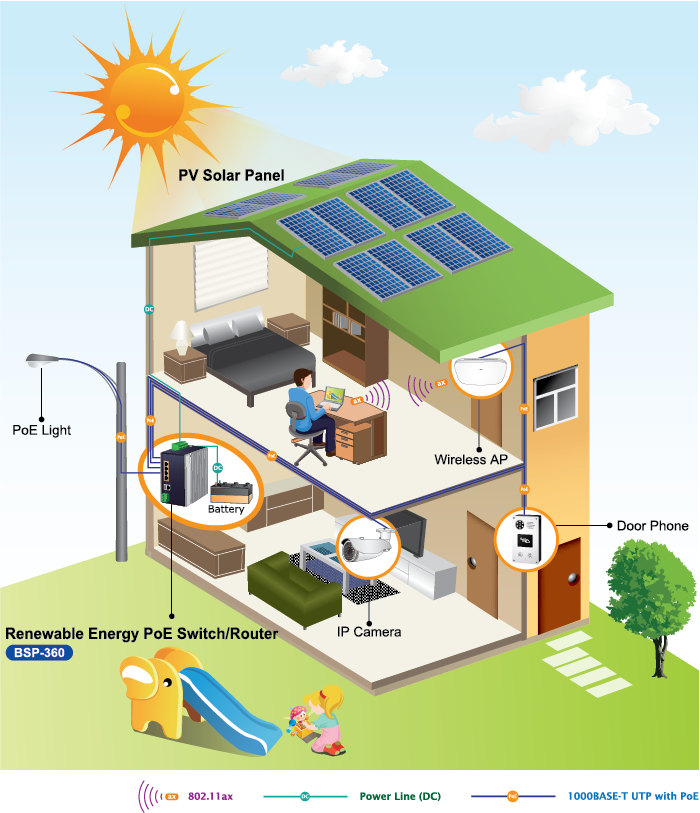 PLANET NMS-360 Renewable Energy Management Controller allows users to remotely monitor the statuses of the BSP-360-powered devices in real time, including green power status, average power usage, instant PoE usage, and so on. Through the remote web management, the administrator at the headquarters is able to monitor and control those remote powered devices powered by the BSP-360. This allows the administrator to flexibly install APs in remote areas, without worrying about locating extra electric outlets.

When functioning with a pair of the wireless transmission units, the BSP-360 Renewable Energy PoE Switch/Router can be efficiently managed from a remote control center. 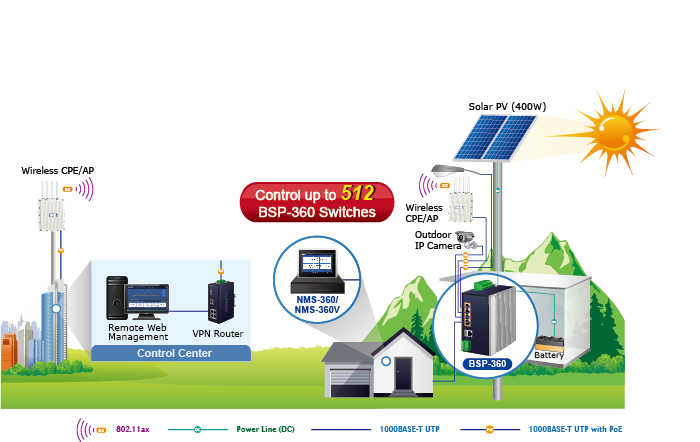 **To get the best performance, match it with PLANET devices for outdoor wireless bridge applications.

With the 24VDC out interface, the BSP-360 enables you to supply power to other devices, such as PLANET IGT-905A fiber media converter where high-speed and stable data transmission can be made to a remote core network. It can extend the distance to a maximum of 120 kilometers between the BSP-360 and control center via fiber-optic link. 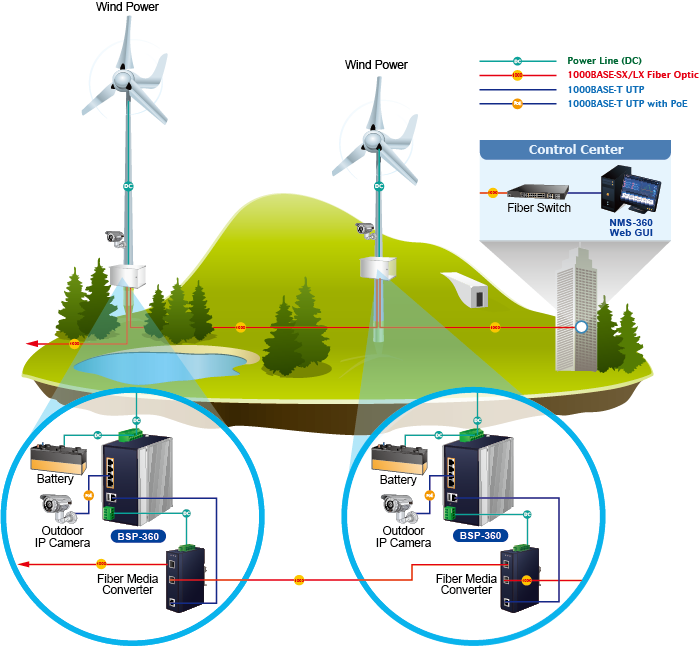