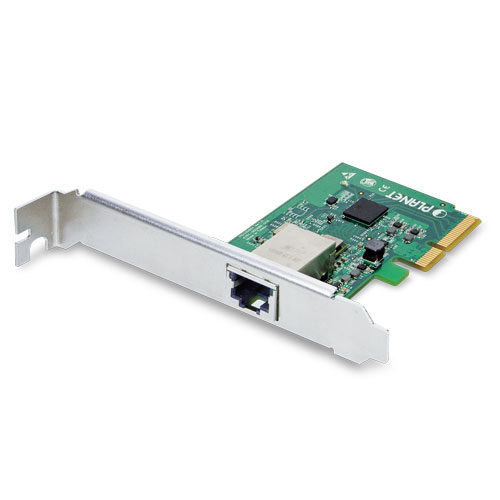 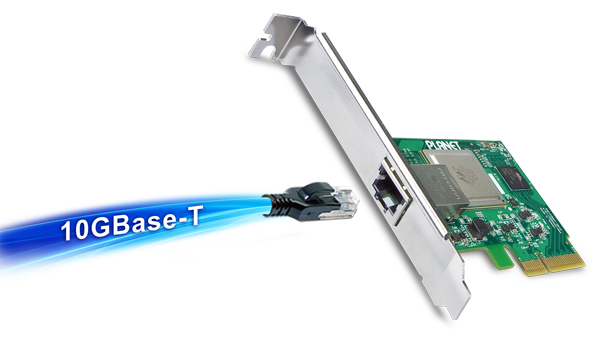 Cost-effective and Ideal 10G Copper NIC Adapter
Compared with 10G adapter with CX4 and SFP+ interface, PLANET 10GBASE-T PCI-E adapter is the best choice in that the ENW-9803 10GBASE-T can reach up to 100 meters over Cat.6a or Cat.7 RJ45 cable, whereas the CX4 and SFP+ interface only can work with fixed speed rate but the ENW-9803 10G copper NIC adapter can adjust and work with the speed rate of 100M/1G/2.5G/5G. Not only that the CX4 interface only can extend up to 15 meters in distance. The cost is too high for having an extra SFP+ interface for the SFP+ transceiver. However, with the ENW-9803, customers only spend on Cat.6a or Cat.7 cable as the ENW-9803 is bundled with RJ45 connector, thus costing less than the SFP+ transceiver.

10GbE Device Designed for Low-power, Low-cost and Single-port Applications
The ENW-9803 is an optimized 10GbE device designed for low-power, low-cost and single-port applications required in application servers, high-end workstations and personal computers. This makes it ideal for enabling 1GbE to migrate to 10GbE for bandwidth-intensive workstation applications and low-end to mid-range network appliances. With the innovative PCI Express Bus Architecture, it offers increased bandwidth, reliability and additional functionality compared with standard GbE network cards. The performance of throughput at rates up to 20Gbps is unbelievable, thus eliminating the bottleneck that exists with the current Gigabit network. PLANET ENW-9803 is designed to connect your servers and workstations, guaranteeing extremely high throughput and excellent signal quality.

Standard 802.1Q VLAN Support
Moreover, the ENW-9803 supports IEEE 802.1Q VLAN which allows it to operate in a flexible and secure network environment. With 9K jumbo frame ability and IEEE 802.3 flow control support, it further optimizes throughput and wire-speed packet transfer performance without risk of packet loss. The high data throughput of the device makes it ideal for most 10 Gigabit Ethernet environments.

Multiple OS Support
The ENW-9803 operates completely well with most of the popular and latest operating systems including Microsoft Windows Server, Linux and VMware, enabling simple integration into network designs. There is no need of any modification to the server's operating system or any special software required for the ENW-9803 to be integrated into the system.

Server NICs
PLANET ENW-9803 is equipped with one 10 Gigabit RJ45 interface, giving 10 times more performance than the existing Gigabit transmission. Thus, the ENW-9803 can easily act as a server NIC of your networks by wiring to the backbone switches. With one PCI Express rev. 2.0 specification x4 Interface, the ENW-9803 is an ideal solution for the mainboard with PCI Express interface now and in the future. 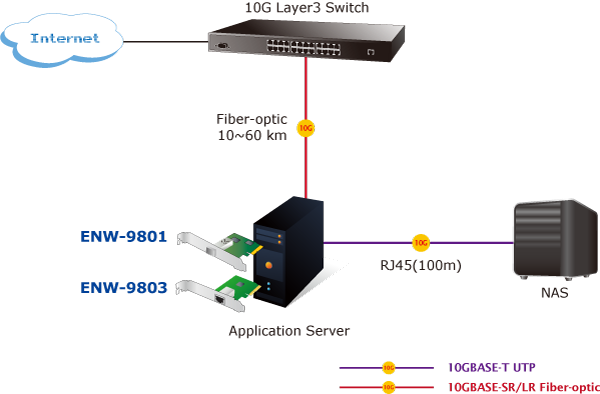