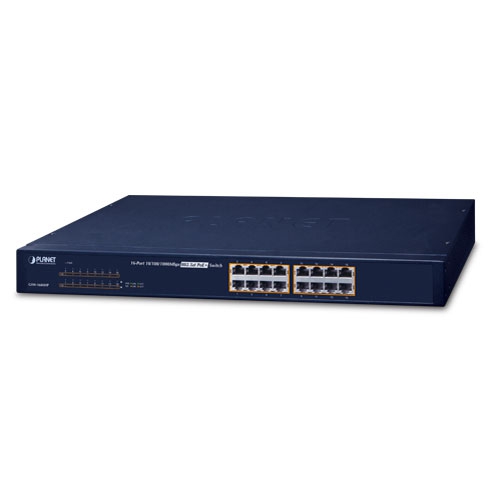 To facilitate 30W PoE power network applications with Gigabit speed transmission, PLANET GSW-1600HP 16-port Gigabit 802.3at Power over Ethernet Plus Switch features high-performance Gigabit IEEE 802.3af PoE (Up to 15.4W) and IEEE 802.3at PoE+ (Up to 30.8W) capabilities on all ports. By offering reliable switching technology and advanced networking features, the GSW-1600HP optimizes the installation and power management of network devices such as wireless access points, VoIP phones, and security cameras. It also eliminates time and cost of deployment by integrating power and data switching into one unit, and freeing network devices from restrictions of power outlet locations and the additional AC wiring.

The GSW-1600HP brings an ideal secure surveillance system at a lower total cost. The GSW-1600HP provides 16 10/100/1000Mbps 802.3at PoE+ ports able to feed sufficient PoE power for 16 IEEE 802.3af/IEEE 802.3at PoE+ IP cameras at the same time. It is also able to connect with one 16-channel NVR or two 8-channel NVRs, uplinked to backbone switch and the monitoring center. With such high-performance switch architecture, the recorded video files from the PoE IP cameras can be saved to the NVR system where the administrator can control and monitor the surveillance images in both the local LAN and remote sites.

The Idle mode Link Down power saving of the GSW-1600HP complies with IEEE 802.3az Energy Efficient Ethernet (EEE) standard to automatically lower power for a given port when it is not linked. The Intelligent Scales Power technology actively determines the appropriate power level based on the cable length. When connecting to the GSW-1600HP with Ethernet cable shorter than 20m, a device can obtain maximum power saving because the GSW-1600HP would automatically detect the Ethernet cable length and reduce power usage. The connected device can substantially reduce the overall power consumption, which makes a significant contribution to energy saving.

Providing data transfer and high Power PoE in one unit, the GSW-1600HP is able to reduce the need of extension cables and dedicated electrical outlets on the wall, ceiling or any unreachable place. It helps to lower the installation costs and simplify the installation effort. All RJ45 copper interfaces of the GSW-1600HP support 10/100/1000Mbps auto-negotiation for optimal speed detection through RJ45 Category 6, 5 or 5e cables. It also supports standard auto-MDI/MDI-X that can detect the type of connection to any Ethernet device without requiring special straight or crossover cables.

Providing 16 PoE in-line power interfaces, the GSW-1600HP can easily build a power that can centrally control IP phone system, IP camera system and wireless AP group for the enterprise. Cameras can be installed around the corner in the company or campus for surveillance demands. Without the power-socket limitation, the GSW-1600HP makes the installation of cameras easier and more efficient. 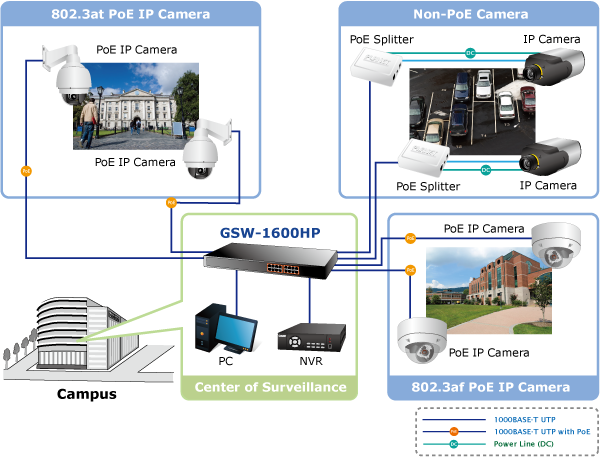