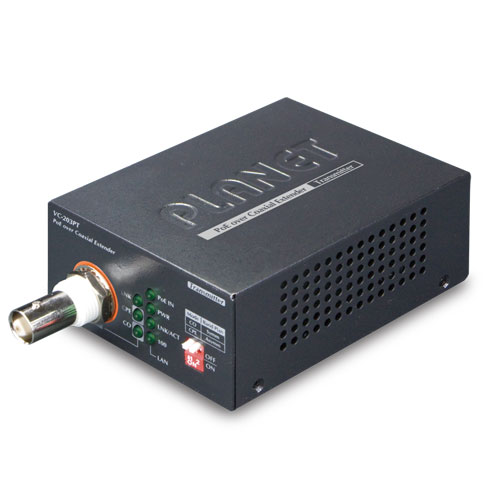 PLANET VC-203Px series of PoE over Coaxial Extender is designed to extend IP Ethernet transmission and inject power over an existing coaxial cable for distance up to 1000m (3280ft) to PoE IP camera, PoE Wireless AP and any 802.3af/at complied powered device (PD).

The VC-203Px consists of a Transmitter and Receiver set which can work in pair without any power adapter and anywhere on your network infrastructure. The solution contains two brand-new products:

It is a perfect solution for sending IP Video links and power to remote PoE IP camera installation that are beyond the 100 meters distance limit of Ethernet.

Power over Coaxial
Based on IEEE 802.3at High Power over Ethernet and up to 25 watts of power output, PLANET PoE over coaxial extender solution eliminates the need for additional remote site power while allowing a single PoE source, such as a PoE network switch, to provide power to both transceivers and the camera at long range. This feature eliminates the need for local and remote site power supplies.

Stable Operating Performance under Difficult Environments
The VC-203PT and VC-203PR extenders are one perfect combined solution for extending data and power transmissions over long distances for places like warehouses, parking lots, campuses, casinos, and many more. They can operate stably under temperature range from -40 to 75 degrees C which enables the users to conveniently apply the device in almost any location of the network.