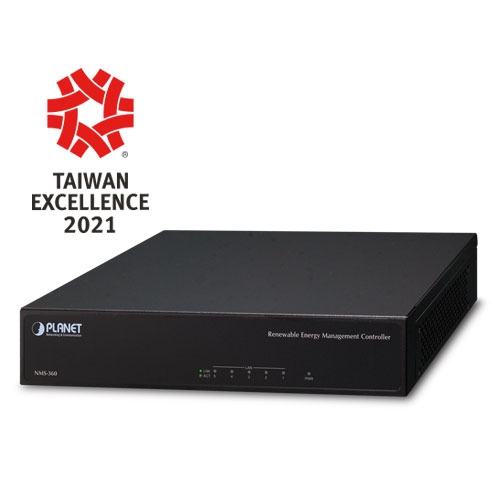 PLANET NMS-360 Renewable Energy Management Controller can automatically detect up to 512 remote devices powered by PLANET BSP-360 Industrial Renewable Power Unit in ways that solar PV, battery and PoE port usage are recorded. Besides, traffic logs that are compliant with SNMP, MQTT Protocol and PLANET Smart Discovery utility are managed. It thus enables administrator to centrally manage a network of up to 512 nodes from a central office, greatly boosting network and power management efficiency.  Moreover, the NMS-360 can support up to 2,048 PLANET IP cameras to do snapshots through the ONVIF Protocol. 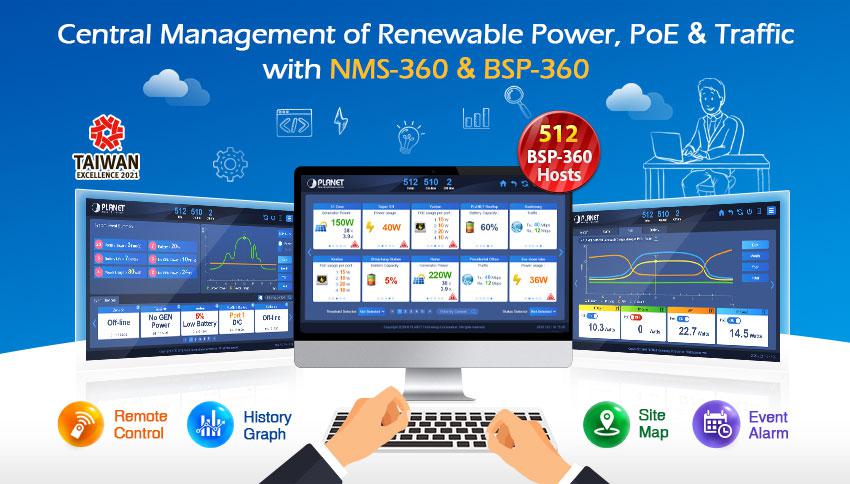 Watch Over Energy Usage Level, and System and Device Events within Minutes

The home page displays the statuses of system and device events to oversee whether or not they are within the threshold set by the administrator. This can help the administrator quickly know whether the system is operating stably or not. The system event function offers the on-time event statistics table and you can filter the event device with one touch. The event devices section shows which devices are low in energy, not working properly and off the line. A graph of the current energy usage level and the green power utilization shows the power traffic statuses of the selected devices. Thus, it enables you to have a valuable information on the current energy statuses and other situations at a glance. With that, the administrator can immediately address whatever problem these devices may have. 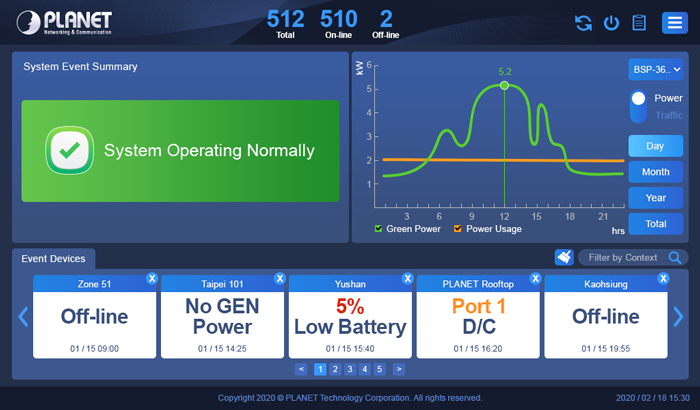 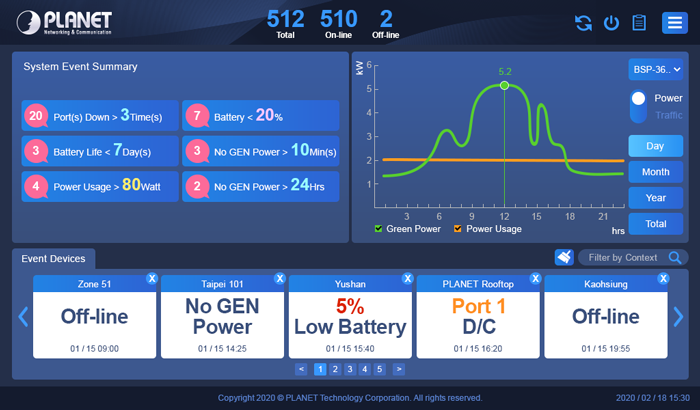 The NMS-360 enhances user experience by providing a more user-friendly setup wizard with a step-by-step guidance on how each related function is to be set. Just like an app, it reduces training time and allows even non-technical users to be able to set up management network system within minutes.

The NMS-360 interactive device table includes the statuses of system PoE usage, per port PoE usage, battery capacity, and linkup port traffic for each BSP-360-powered device. Just like an app, the administrator can see at a glance the status of each BSP-360-powered device at the same time. For a quick check on a specific function, the administrator can use the “Threshold Selector”, “Status Selector” and “Filter by Context” function. 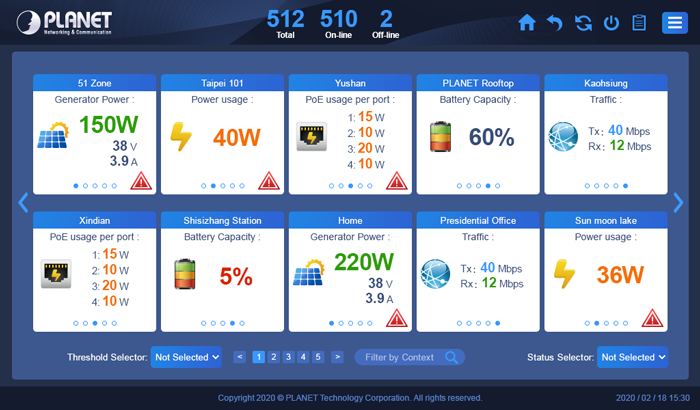 As the NMS-360 comes with a detailed system view of the BSP-360-powered devices, it enables to configure each powered device like turning on IP cam 1, turning off IP cam 2, etc. The history graph records the status of each device’s generator power, power usage and traffic. If the BSP-360 detects a PLANET camera, you can add it to the ONVIF IP cam list for monitoring purposes. 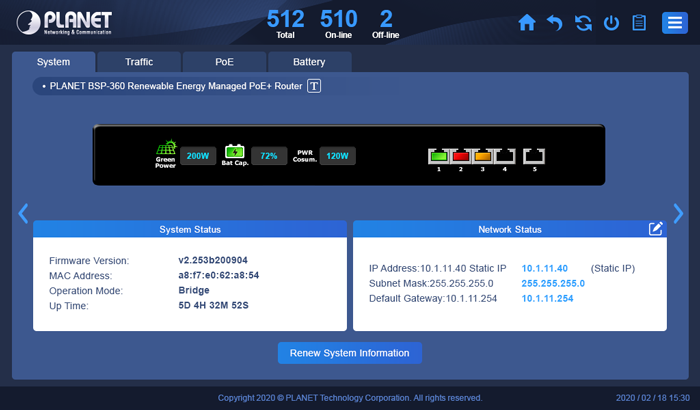 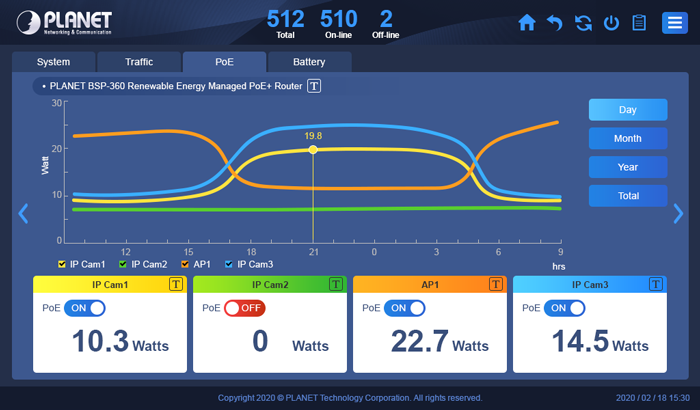 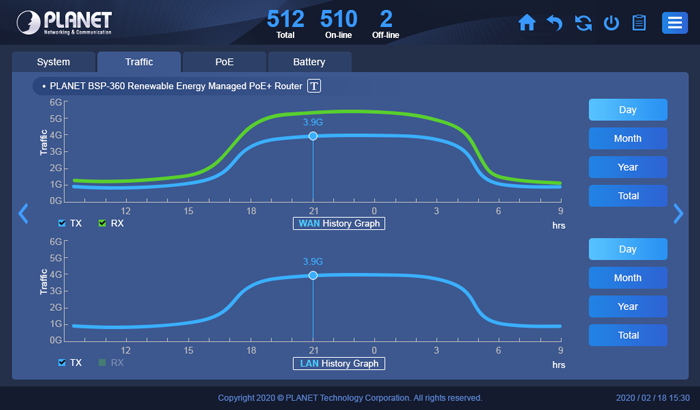 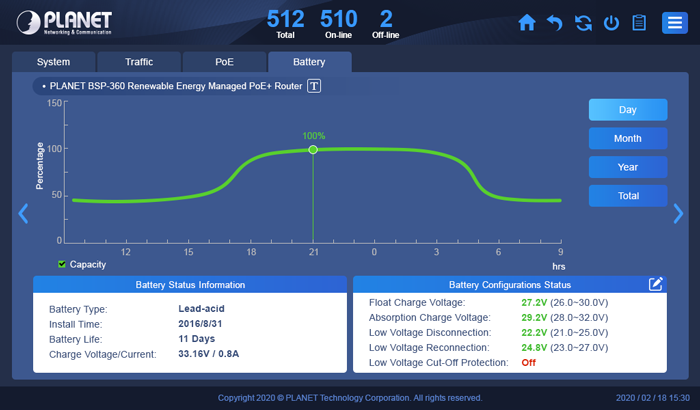 The NMS-360 e-mail alarm function is designed to send an email alert to the administrator via the SMTP server where syslog information can be found once an abnormality is detected. This can prompt the administrator to quickly fix the identified problem in the network.

With the site maps, the BSP-360 can be located according to the field deployment, thus saving your time and cost of on-site support and monitoring. The current statuses of devices are shown in real time and the IP cam snapshot function is able to show the real onsite image. If the generator power is low, you can through the real-time image see if it is cloudy or raining, or other factors are involved.

PLANET NMS-360 Renewable Energy Management Controller allows users to remotely monitor the statuses of the BSP-360-powered devices in real time, including green power status, average power usage, instant PoE usage, and so on. Through the remote web management, the administrator at the headquarters is able to monitor and control those remote powered devices powered by the BSP-360.

The BSP-360’s built-in four 802.3at/802.3af PoE ports allow the administrator to flexibly install PoE wireless APs in remote areas, without worrying about locating extra electric outlets. When functioning with a pair of the wireless transmission units, the BSP-360 Renewable Energy PoE Switch/Router can be efficiently managed from a remote control center. 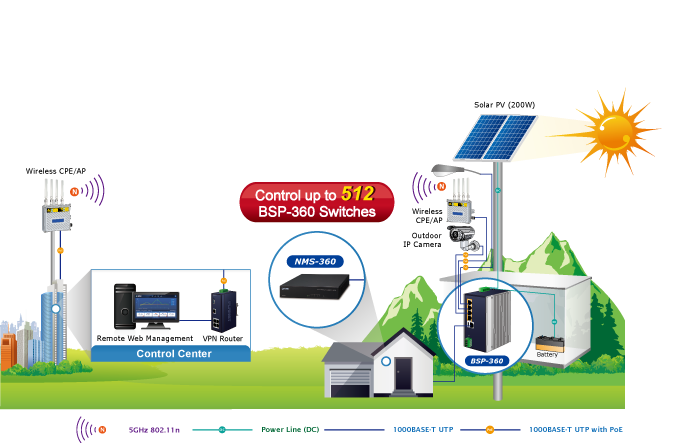