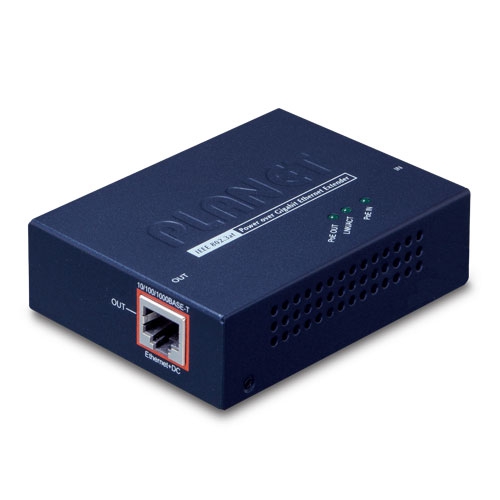 No matter how many PoE supported networking devices such as PoE IP cameras, PoE wireless access points and PoE IP phones are deployed, they are easily installed without the need of having an additional electrical outlet. However, limited by the UTP cabling, only up to 100 meters (328 ft.) of cable is used. Thus, the POE-E201 is designed as the extender to transmit both Gigabit Ethernet data and 802.3af/at PoE power over another distance of 100m. By daisy-chaining multiple POE-E201s, distance can be tripled or quadrupled to meet your requirements.

With its ability to provide 802.3af/at PoE and Gigabit Ethernet data extension, the POE-E201 is an ideal networking solution for service providers, campuses and public areas. It enables you to centrally manage the power easily, efficiently and cost-effectively no matter now remote the location is.

The POE-E201 Gigabit 802.3af/at PoE Extender is quite easy to be installed by the simple plug and play configuration. It is used between a power source equipment (PSE) and a powered device (PD).

The POE-E201 injects power to the PD without affecting the data transmission performance. The POE-E201 offers a cost-effective and quick solution to double the standard range of PoE from 100 to 200 meters. This Gigabit 802.3af/at PoE Extender, designed in a compact box, features 2 RJ45 ports, of which the "PoE IN" port functions as PoE (Data and Power) input and the "PoE OUT" port on the other side functions as PoE (Data and Power) output. The "PoE OUT" port is also the power injector to transmit DC voltage via the Cat. 5/5e/6 cable and transfer data and power simultaneously between the PSE and a PD.

Is 100 meter cable long enough for a long-distance IP surveillance deployment? The answer is certainly not.  To achieve the benefits of IP surveillance and also the long-distance IP camera distribution, PLANET POE-E201 Gigabit 802.3af/at PoE Extender is a quick and cost-effective option besides adopting a PoE injector or PoE Ethernet switch equipped with fiber optic interface. In the simplest application, the POE-E201 enables a PoE IP camera to be installed up to 200 meters away from a PoE injector. The PoE injector delivers PoE power over the first 100 meters to the POE-E201 over UTP cable, and then the POE-E201 forwards the Ethernet data and remaining POE power to the PoE IP camera. The POE-E201 does not require an external power supply and can be installed easily by the plug and play configuration, meaning the operator does not need to configure the POE-E201. 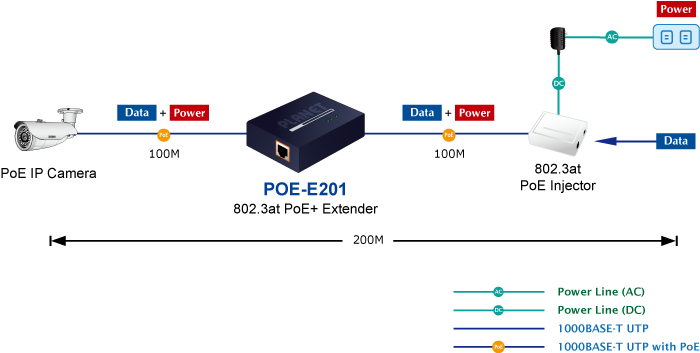 In the wireless LAN, the POE-E201 enables wireless access points to be connected using standard Cat.5/5e/6 cable over 100 meters in length from the PSE, such as PoE switch, PoE injector hub or single port PoE injector. The POE-E201 is also powered by the incoming PoE on the Ethernet cable and does not require any external power feed.  Therefore, the POE-E201 can reduce the usage of cables and eliminate the need of dedicated electrical outlets on the wall, ceiling or any unreachable place for the wireless AP deployment. 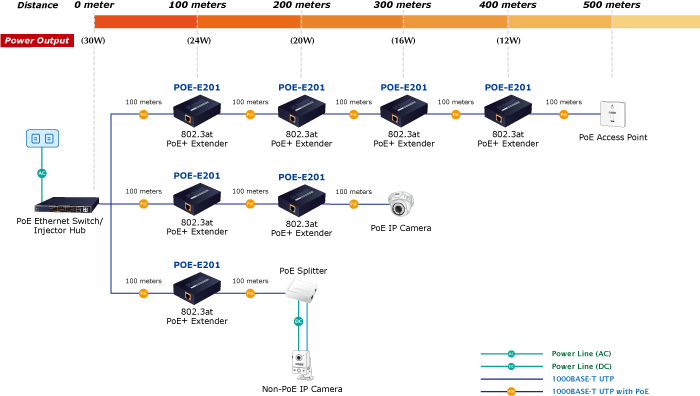