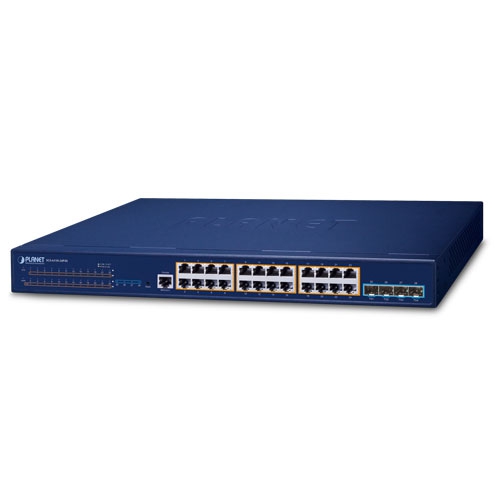 The four SFP+ ports built in the SGS-6310 series boasts a high-performance switch architecture that is capable of providing non-blocking switch fabric and wire-speed throughput as high as up to 80Gbps, which greatly simplifies the tasks of upgrading the LAN for catering to increasing bandwidth demands. Each of the SFP+ ports supports Dual-Speed, 10GBASE-SR/LR or 1000BASE-SX/LX, meaning the administrator now can flexibly choose the suitable SFP/SFP+ transceiver according to the transmission distance or the transmission speed required to extend the network efficiently.

Two of the 10G SFP+ ports can be configured to connect several SGS-6310 series for building a virtually logical facility. The stackable SGS-6310 series, suitable for enterprises, service providers and telecoms, provides high port density, large uplink bandwidth and high switch stack performance, thus giving great flexibility for different application requirements. The SGS-6310 series can connect as a ring for redundancy and ensures that data integrity is retained even if one switch in the stack fails. You can even hot-swap switches without disrupting the network, which greatly simplifies the tasks of upgrading the LAN for catering to increasing bandwidth demands.

To fulfill the needs of higher power required PoE network applications with Gigabit speed transmission, the SGS-6310-24P4X features high-performance Gigabit IEEE 802.3at PoE+ (up to 30 watts) on all ports. It perfectly meets the power requirements of PoE VoIP phone and all kinds of PoE IP cameras such as IR, PTZ, speed dome cameras or even box type IP cameras with built-in fan and heater.

The SGS-6310-24P4X’s PoE capabilities also help to reduce deployment costs for network devices as a result of freeing from the restrictions of power outlet locations. Power and data switching are integrated into one unit, delivered over a single cable and managed centrally. It thus eliminates the cost for additional AC wiring and reduces installation time.

Besides being used for IP surveillance, the SGS-6310-24P4X is certainly applicable to build any PoE network including VoIP and wireless LAN. Under the trend of energy savings worldwide and contributing to the environmental protection on the Earth, the SGS-6310-24P4X can effectively control the power supply besides its capability of giving high watts power. The “PoE schedule” function helps you to enable or disable PoE power feeding for each PoE port during specified time intervals and it is a powerful function to help SMBs or enterprises save energy and budget. 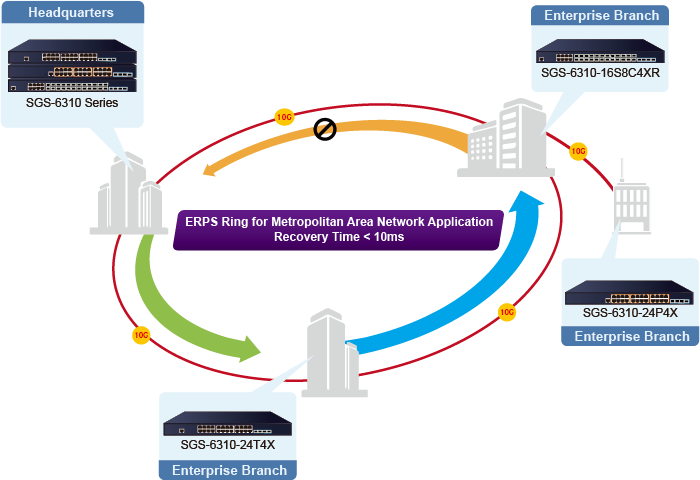 The SGS-6310 series can be programmed for basic switch management functions such as port speed configuration, port aggregation, VLAN, Multiple Spanning Tree Protocol, bandwidth control and IGMP snooping. This switch provides 802.1Q tagged VLAN, Q-in-Q, voice VLAN and GVRP Protocol functions. By supporting port aggregation, the SGS-6310 series allows the operation of a high-speed trunk combined with multiple ports.  It enables up to 64 groups for trunking with a maximum of 8 ports for each group.

The SGS-6310 series is loaded with powerful traffic management and WRR features to enhance services offered by telecoms. The WRR functionalities include wire-speed Layer 4 traffic classifiers and bandwidth limitation which are particularly useful for multi-tenant unit, multi-business unit, Telco, or network service applications. It also empowers the enterprises to take full advantage of the limited network resources and guarantees the best in VoIP and video conferencing transmission.

The SGS-6310 series offers comprehensive Layer 2 to Layer 4 Access Control List (ACL) for enforcing security to the edge. It can be used to restrict network access by denying packets based on source and destination IP address, TCP/UDP ports or defined typical network applications. Its protection mechanism also comprises 802.1x Port-based and MAC-based user and device authentications, which can be deployed with RADIUS, to ensure the port level security and block illegal users.

For efficient management, the SGS-6310 series is equipped with console, Web and SNMP management interfaces.

Moreover, the SGS-6310 series offers secure remote management by supporting SSHv1/v2 and SSLv3 connection which encrypts the packet content at each session.

Providing 24 PoE in-line power interfaces, the SGS-6310-24P4X can easily build a power that can centrally control IP phone system, IP camera system and wireless AP group for enterprises. The SGS-6310-24P4X delivers full ports of 802.3at/af compliant Gigabit Ethernet network connectivity with high-performance and cost-effective advantages for the increasing number of PoE IP telephones, PoE IP cameras, PoE wireless access points and other devices applied at the edge of the small or medium enterprise network. With the four built-in SFP+ ports, the SGS-6310 series provides the uplink to the backbone network through the 10G Ethernet LR/SR SFP+ modules. It further improves the network efficiency and protects the network clients by offering the security and QoS features. 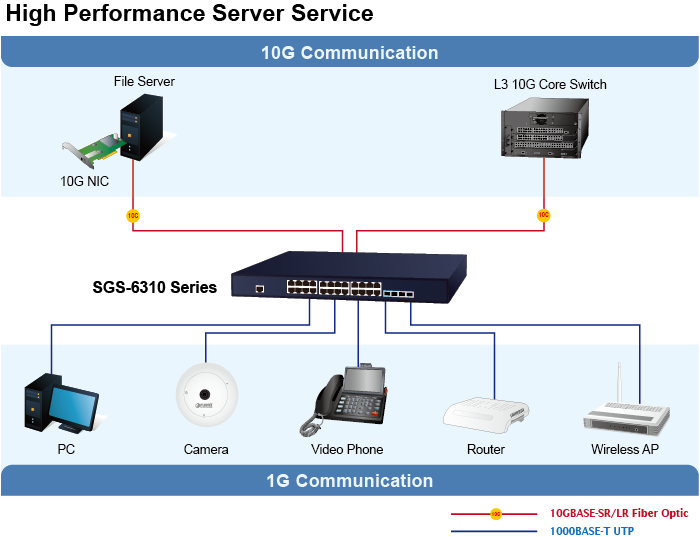 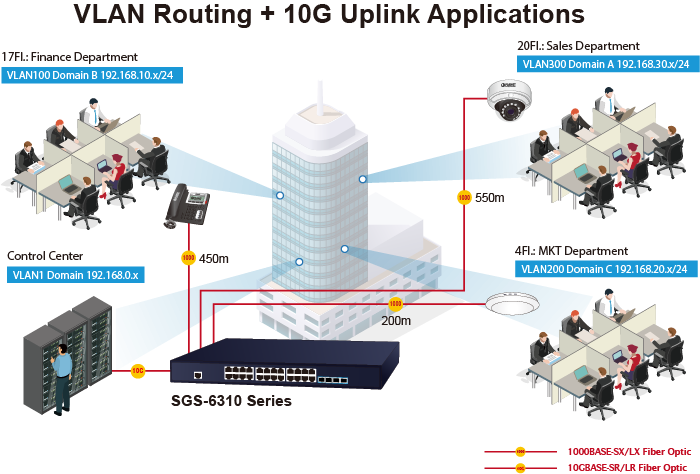